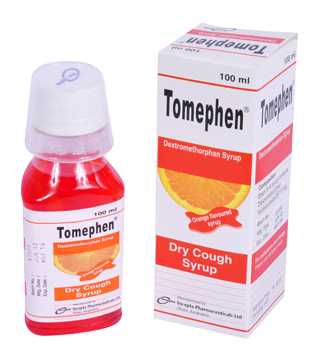 Dextromethorphan is the d-isomer of the codeine analog of levorphanol, but does not have any opiate-like effects. It is a

non-narcotic antitussive. Its cough suppressant action is due to a central action on the cough center in the medulla.

Dextromethorphan does not induce tolerance, and has no potential for addiction like opiates.

Dextromethorphan is used to relieve dry cough caused by a cold, flu or other conditions.

Tomephen is an orally administered syrup.

<2 years of age: Use only as directed by the physician.

Adverse effects with Dextromethorphan appear to be rare and may include dizziness and gastrointestinal disturbances.

USE IN PREGNANCY & LACTATION

Pregnancy: Adequate and well-controlled studies in human have not been done. However, Dextromethorphan has not been reported to

cause problems in nursing babies.

The following medicines should be taken carefully while concomitantly use with Dextromethorphan: Amiodarone, Fluoexetine,

coordination, difficulty in breathing, and seizures.

Do not store above 30C. Keep away from light and out of the reach of children.

Tomephen Syrup: Each box contains a bottle of 100 ml syrup and a measuring cup.